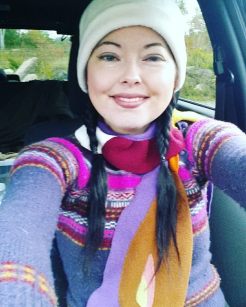 I had “big” plans yesterday morning. Once I got through my initial pain and trouble of getting going in the morning, and got the animals taken care of, I was going to take myself out to breakfast, and then do some shopping. I’m not a big shopper, but I haven’t been going out at all except for Doctors appointments and while I’m mostly fine with that, I did need to get out for a bit on my own – that’s important some times. Especially when you are well enough since so often I haven’t been well enough or had the energy to drive.

It was actually cool outside – fall is in the air and you can smell it and feel it now after our late start and unexpected heat wave. I was pretty excited because i got to wear one of my favorite wool sweaters and also a hand made scarf and hat, that my friend, and artist, had gifted me in the spring, which I had not been able to wear yet. So I took a picture to share…. she calls the scarf a story scarf and it’s just beautiful. All of her work is, but I really love the scarf.

My lane is a mile long and you need to stop and go through closed gates to get in or out because part of it is a right of way through vacant land, but cows pasture there over the summer, so we need to keep them in there, off my land, and off the township road, which is another mile to the main road.

When I got back in my car after closing the first gate, I had a sudden super sharp explosion of pain on my right side. I’ve been having problems with that hip for a while now, sometimes a sharp pain if I suddenly  roll on it etc, but the pain is very random and a lot of the time not even there, or just sore. There is no bruise. Anyway, the pain was so sudden and sharp, I actually fell, and vomited. By the time I got to my second gate I was worried enough to go to the ER.

Now I have a high tolerance for pain and I hate nowhere else on earth more than the ER. For more than one reason – no one likes going the ER. But anyone with Chronic illness and chronic pain knows it can be a nightmare. I knew this was something I needed to get checked out though, but still it took some convincing. But if I force myself to go, that means something is really wrong.

Three Doctors looked at me because of course I’m interesting. I have three autoimmune diseases, never mind the endometriosis and surgeries which I avoid bringing up as it distracts them from whatever I am there for. But I can’t hide the scars on my belly when they look, so it always comes up. I told the one Dr. I didn’t want to come and could probably easily just tough this out at home. He looked at me like I was nuts and then scolded me big time. He mentioned that with the number of immune suppressants I am on, I need to come in for every thing, every tiny weird thing, because I could, quite simply… die.

And I know he’s right, but going to the ER also puts me at risk of infection, so it’s always a toss up. Anyway this multiple hour delay did not lead to the X-ray I was hoping for. I still have an infection, and my kidney is still acting up – so they gave me antibiotics and more testing needs to be done on my kidneys and bladder. And they all also believed that it’s not my bone but rather something, likely intestine, swollen, and being crushed between my rib and hip when I move in certain ways. The pain is very hard if not impossible to recreate, or find, until it hits me. They also told me to go to 60mg of prednisone up from the 23.5 mg I just managed to wean myself down to after increasing it a few weeks ago for my infections. No thanks.

I see my Doctor next week and we’ll do further testing… and in the meantime take the antibiotics and see what happens. Afterwards, I was exhausted, but still determined to do something nice for myself so I picked up a few groceries and that adorable mug, which made me smile. It was short, but I got out for a bit still, and got through the day. When you can, you need to dust that crap off… it’s just a constant part of life. But of course today, I’m completely drained.

When I was trying to get out of the parking lot, the machine would not accept my quarters, and I only had three loonies (one dollar coins)… it only takes those and 2 dollar coins… I tried to back up, but the two cars behind me would not move, so I put my car in park and got out, and was almost in tears out of frustration as the lady from the truck behind me approached me on foot. I told her I needed to turn around, to get out of the way and she asked me what I needed and traded my quarters for a loonies so I could get out of the emergency parking lot. It was very kind of her.

I cannot believe the amount of cute chicken stuff in the stores right now! It’s adorable but I think a complete conspiracy, I wanted to buy it all! I exhibited amazing restraint through because I was also distracted by all the new yarn colors this season… and the fact that I need to get this farm through the winter, which makes me reconsider everything I buy or want to.

I’m hoping the cooler weather will bring my girls into heat. Fred has been trying, and the girls really like him, but aside from making friends, I don’t think he’s gotten to second base with any of them, let alone further.

There is no doubt, Fred is smiling in this picture! It cracks me up.

It was super foggy the other morning, and actually quite beautiful, it made for an extra special morning… the farm felt a little extra magical.

Martha and Fred have been spending a lot of time together… quality, alone time, although it’s mostly sharing bits of grass and him quietly following her. I think maybe he’s trying the gentleman’s approach?

He is quite a sweetheart, and I am very pleased with his disposition so far. He fits well with the flock and has no problems with any of the other animals either.

Everyone has been enjoying what’s left of the pastures and greens before it’s too late… the frost, and what follows that, is approaching quickly.

This weekend we have company coming and wood to haul in – before we get too much behind. We’ve started, but we have a lot left to go to get us safely through the winter and keep ourselves, and the house, from freezing up. I had hoped to get many projects done before winter but of course we always run out of time, and some extra things are holding up my decision making processes so I won’t be able to get some projects done until they are resolved.

I am looking forward to winter, I don’t mind the darker parts of it, despite the cold. But I know it will be challenging, it’s always is… and you can only ever prepare for so much, so we’ll just do the best we can to make sure we are ready for whatever mother nature might decide to throw at us this year.