My last Doctors appointment was the first one in probably 2 years I did not leave and immediately have an emotional break down over. After every appointment I have the same reaction, with any of my Doctors. I cry. I feel hopeless. I then feel angry. Then hopeless again. Then eventually this level of acceptance comes back. It happens, every. single. time.

But not this time. I have to admit I went in with a little bit of a different attitude I think, but it was mostly just the fact my Doctor was honest, and listened. I think just the listening helped even though it didn’t mean he could fix it, he acknowledged my symptoms which is something I’ve been lacking. My Doctors don’t think I’m making anything up but they do act completely indifferent and often just say I just have to deal with it. And I know I do, but you can’t live with diseases and conditions like this and have zero hope. Otherwise you stop trying, and you stop living.

I made a quick vlog to update, it’s not very good, I’m tired and a little brain dead so I apologize in advance, but I did think it was worth it since it’s a little more intimate.

It started off nice and snowy this morning and now the sun is out. It’s actually quite nice. I am completely exhausted as usual – although I haven’t done anything really. I did manage the barn chores and some cuddles with the critters and my main focus this morning is to get the dishes caught up, and I’ve made progress with the laundry… then I’m going to try and rest again. I’m trying hard not to push myself over my limits. My fatigue has been at all time highs which has been such a mental struggle… I’m trying to not dwell on it and instead just roll with it. Dwelling on it only makes me feel hopeless and sad, which is not useful to me. Sometimes it’s OK to feel that way, but not long term. It’s just not productive.

Take each day as it comes. Each hour. Sometimes you can’t ask yourself for anything more than that.

I am amazed at how big Ghost is getting in specific ways… his hips, his face. I think there is a very good chance that he will be bigger than Max when he is done growing. He’s going to be one handsome and intimidating guy. 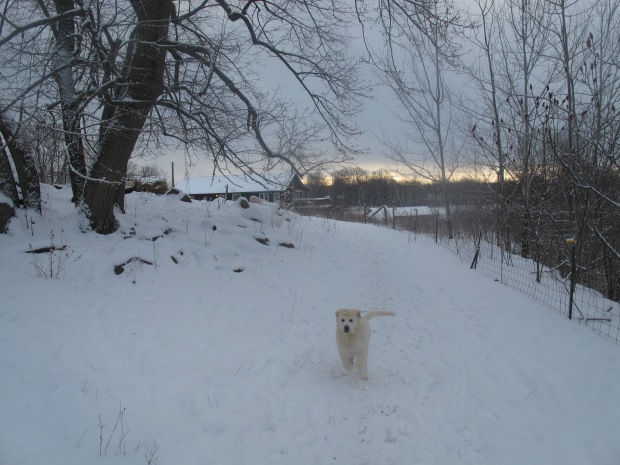 And Nymeria is full of all sweetness and snuggles. So is Ghost, but Nymeria is all about play and cuddles.

Everyone is much happier that even though there is snow it’s not nearly as cold now and they can be outside and it’s not – 30 C.

I realized the other day that Fern hasn’t grown! She has filled out but she’s still the same height as the Nigerian Dwarf goats and she is a Boer. I’m not sure if they grow slower or she is going to remain that short – which is fine if she does but it’s very odd! She’s healthy and fattened up really well but so short still. It’s quite adorable. I have only ever had one other Boer goat,which was a buck, and he was smaller too, but not miniature sized like Fern still is. 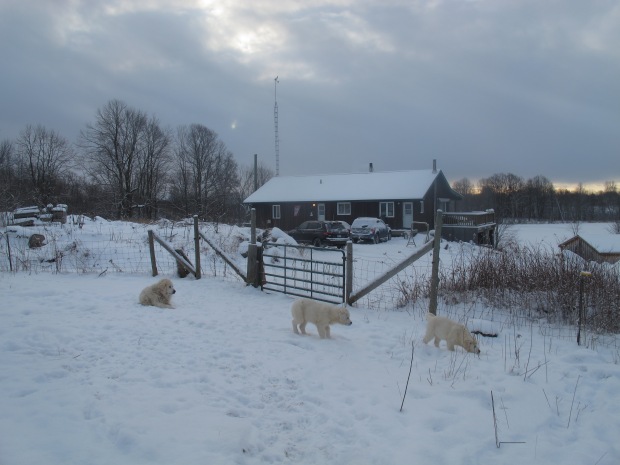 The pups really enjoy the fluffy snow we have this morning. It’s fun to eat, fun to play in. It’s great fun to watch them be silly in it as well. They look like Polar bear cubs rolling around in the snow and playing.

Inside the house the three little boys are really having a busy morning lying on the couch, keeping warm by the fire, enjoying every minute of it.

It’s a rough job, but someone has to do it.

I expect to be wiped out tomorrow and Monday from the medications. Humira usually causes some extra fatigue for me, and I’m sure the methotrexate will too just based on how fatigued I am lately without either of them having to assist. So I plan on trying extra hard to just take the rest I need. It’s always easier said than done, but it’s important.

As always thanks for reading and visiting. If you can curl up by the fire today too, me and the boys highly recommend it!